It’s never too late, and never give up!

It’s never too late, and never give up!

Meeting between local citizens and EcoAlbania

On 11th July, GAIA Kosovo organized a meeting in Biti e Poshtme/Donja Bitinja between local citizens and EcoAlbania, an organization active in the protection of rivers in our neighboring country. The participants were invited to sit in a basketball court along the Lepenac/Lepenc river. From not so far, we could hear the roar of the bulldozers digging into it. The event was organized because this river, running through the village, is threatened by the illegal (at least from our perspective) construction of hydropower plants along it. This construction is one of many in Kosovo and the rest of the Balkans, and citizens know that when they lose their river, they lose a crucial part of their lives. In Biti, they are ready to fight back, as they have been for the past five years.

Olsi from EcoAlbania told the audience how for the last 10 years  they managed to stop some of the constructions of hydropower plants on the Vjosa river, and how they are still continuing the fight with step-by-step information, about how to fight a legal battle, to bring the media to the table, to consult scientists, etc. The hydropower frenzy in the Balkans is motivated by profit for corporations, mostly foreign, when the plants do not actually bring so much return on investment in the end, because of their low capacity of production. Apart from the corrupted politicians and investors, no one wins from this, especially not the locals.

During the meeting, a lot of space and time were given to them to take part in the discussion with Olsi, asking questions on what to do next, how to deal with such and such obstacles, and, also, how not to lose hope. And Olsi was clear: there is hope, because “it’s never too late”. As the issue affects the whole Balkans, we can see that investors usually do not care about protected areas, nor do they care about the law of the countries. Investments into renewable energy like hydropower plants tend to establish around corruptive and shady schemes. Around the world, around 8 million people have been displaced because of hydropower plants construction, and, as of today, there are plans for the setting up of 3,000 of such plants in the Balkans alone. Resisting these projects is essential where the local communities are put in jeopardy because of it.

Olsi invited the local people to find a trustworthy lawyer that would fight to bring official recognition that the construction is illegal – which it is. But he also advised to involve scientists, whose expertise can add value to the movement, precising the extent of the violations to the environment that the constructions can lead to; and people from other profiles like writers, artists, sportsmen/women etc. Finally, he invited organizations and the locals to seize the media, to bring their voice further than in their region, and to gather support everywhere. The message needs to be clear: we have to protect the rivers. Citizens from the area reacted well to Olsi’s message and advice, and the exchanges were fruitful. In the audience, both Albanians and Serbs, the two main communities in the region, asserted their will to unite to oppose the malicious construction schemes, even if the authorities try to divide them and change the narrative. They all have been fighting against the building project for years, and they will remain determined.

The hydropower plant at Biti is not the only one being built in this part of Kosovo. On the same river Lepenc/Lepenac there are a few more mini hydros being built, both within the National Park of Sharr.

In 2018, GAIA hosted long term volunteers in Brezovica, a village in the Sharr Mountains. Throughout their stay there, the volunteers were mainly working on documenting the biodiversity of the area and raising awareness about the importance of the protection of the Sharr mountains among the local people, but also beyond. In the same year, and two consequent years after, BREfest was organised –  a sustainable, educational,  small scale festival – which was trying to advocate on the importance of the mountain throughout the year, not just for recreational purposes as a skiing resort. While being present in Sharr, GAIA got acquainted with the threats that are straining the mountain, one of them being the plan to bury the river and undertaking constructions within the National Park. Hence, the slogan of the festival changed from ‘Sharr is more than snow’ to ‘Together for Sharr’. Once again, there is still hope. Together with locals and NGOs, the battle for rivers will continue, even in these times of crisis. International support for this cause will be welcome, and needed.

Member of the audience listening to the discussion 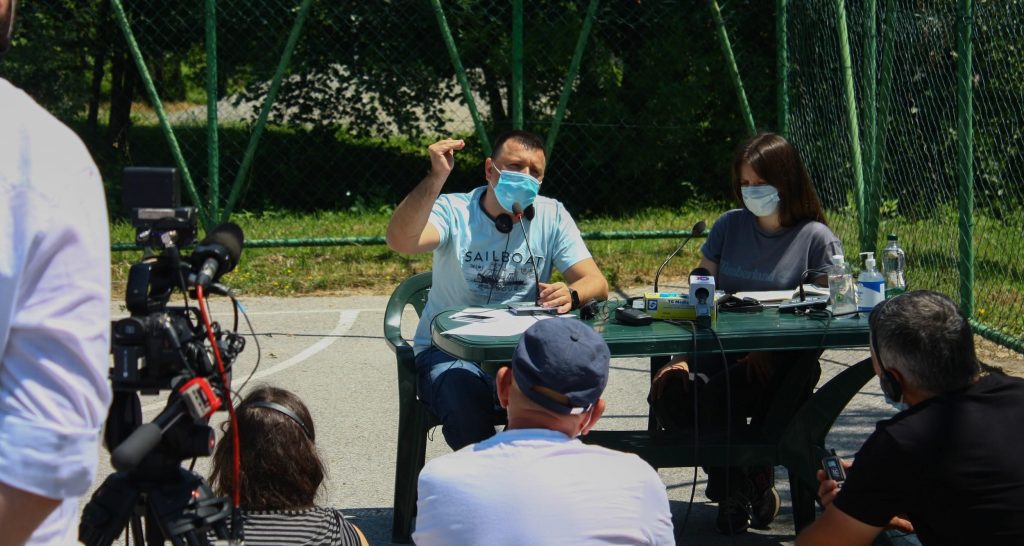 Olsi talking to the audience 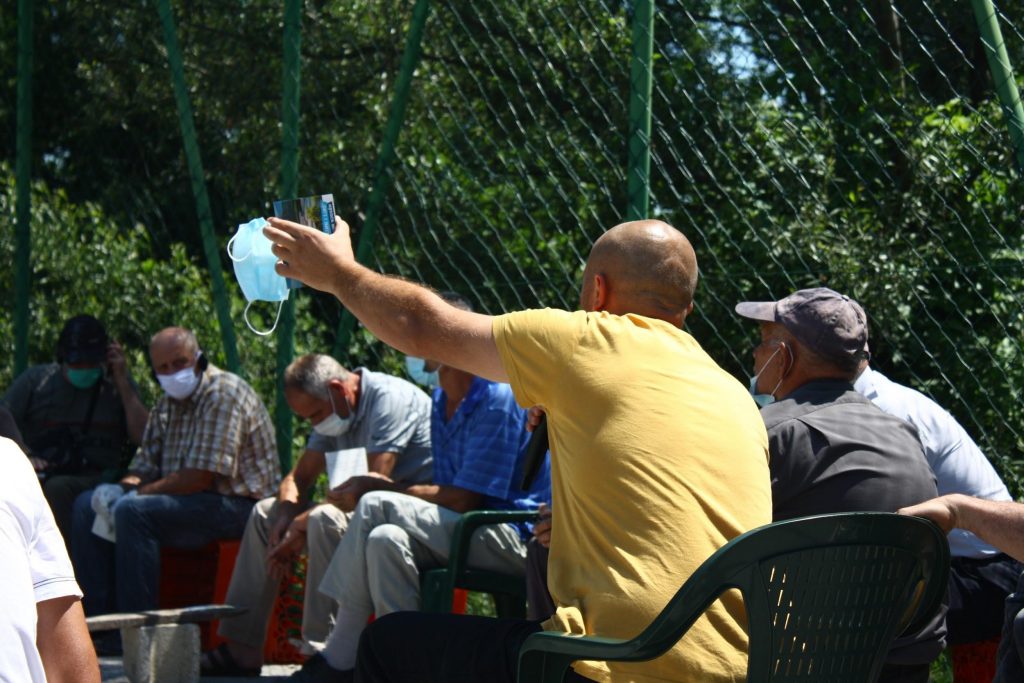 Member of the audience raising his voice 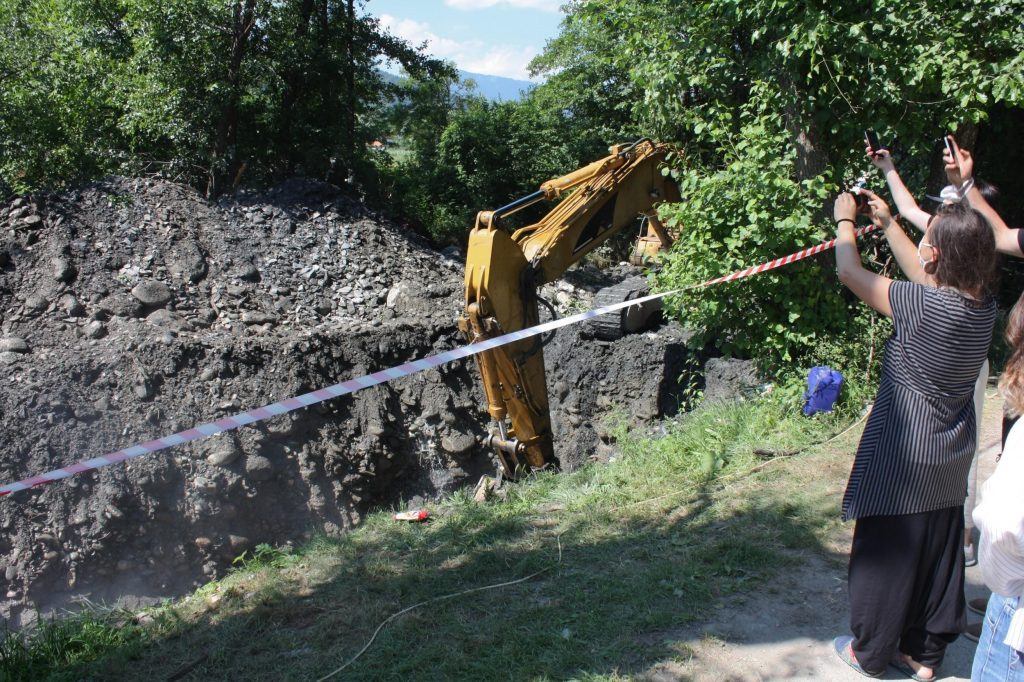 A picture of the excavation inside the river bed 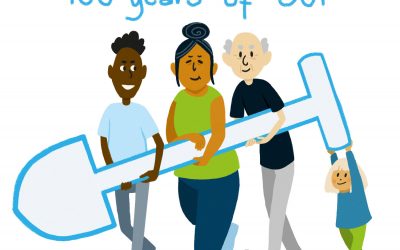 Thanks to Gosia a.k.a. @pojamnik, artist and SCI online volunteer, our website is now enriched with wonderful illustrations! 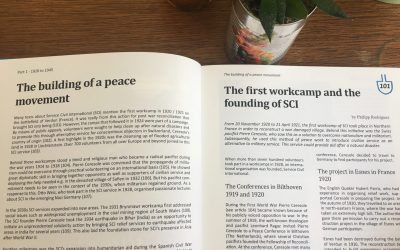 In April, we – Marilou Ruijter and Heinz Gabathuler -, invited SCI activists for an online reading group with the aim to discuss some topics from the SCI anniversary book “Words about Deeds” which was published at the end of 2019.